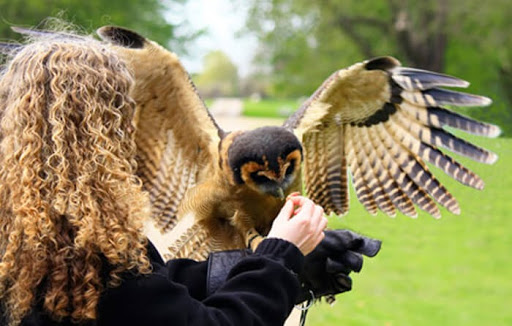 Do you want to find out more about falconry? Do you sometimes get a little lost with the terminology? Below is a great guide to falconry terms used today and what they mean!

The leather straps used to hold the Bird of Prey whilst on the fist. These can be found with small slits at the end to attach a swivel or without, for when they’re flying free.

The act of filing back a birds beak.

Spending time with a bird of prey so they get used to your presence and company, therefore gaining confidence and trust.

When a bird of prey lifts all of the feathers on its body and shakes. They do this for a number of reasons such as to trap heat, realign their feathers and to shake off any debris and downy feathers.

When a Bird of prey folds its wings into its body. This makes them more aerodynamic and can move through the air much faster to catch their prey.

When a bird of prey is raised by someone other than their mother. The human will act as their mother and so the bird will call to humans for food.

When a bird of prey ‘catches’ a thermal and rests in it high in the sky where they are then able to rest in-between wing beats.

Hunts during the day time.

Hunts during the night time.

Hunts during dusk and/or dawn.

Specifically, game hunted by Hawks. Also, one that is sought or pursued.

The use of dogs to cause the quarry to flee from its cover.

Where a bird of prey stoops for a lure and passes it without catching it. Also used to refer to the mating process where the male presents and passes food to the female in an attempt to mate.

A metal object used to secure a bird’s jesses that turns and spins in order to prevent tangling.

The act of catching and securing a bird of prey in your grasp that minimises damage and unnecessary anxiety to the bird. Also used to refer to the pellet cast by a bird of prey.

A small ball ‘thrown up’ by birds of prey containing the indigestible parts of their prey such as bones, feathers, fur etc.

A small, usually horseshoe-shaped, object at the end of thin rope used by the falconer to replicate a bird in flight for falcons to catch. Sometimes decorated by the falconer in the feathers of the prey they would like their Bird to catch such as crow, pigeon or magpie.

There is also a rabbit lure that serves a similar purpose that is used with some birds of prey that catch rabbits, such as Hawks. 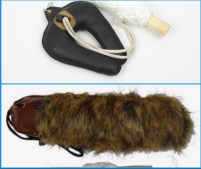 If you’re interested in learning more about falconry, then book a falconry experience with us at The Hawking Centre. We have a wide range of experiences to suit everyone including Half Day, Full Day and our Falconer for a Day experience. To find out more, feel free to contact us!